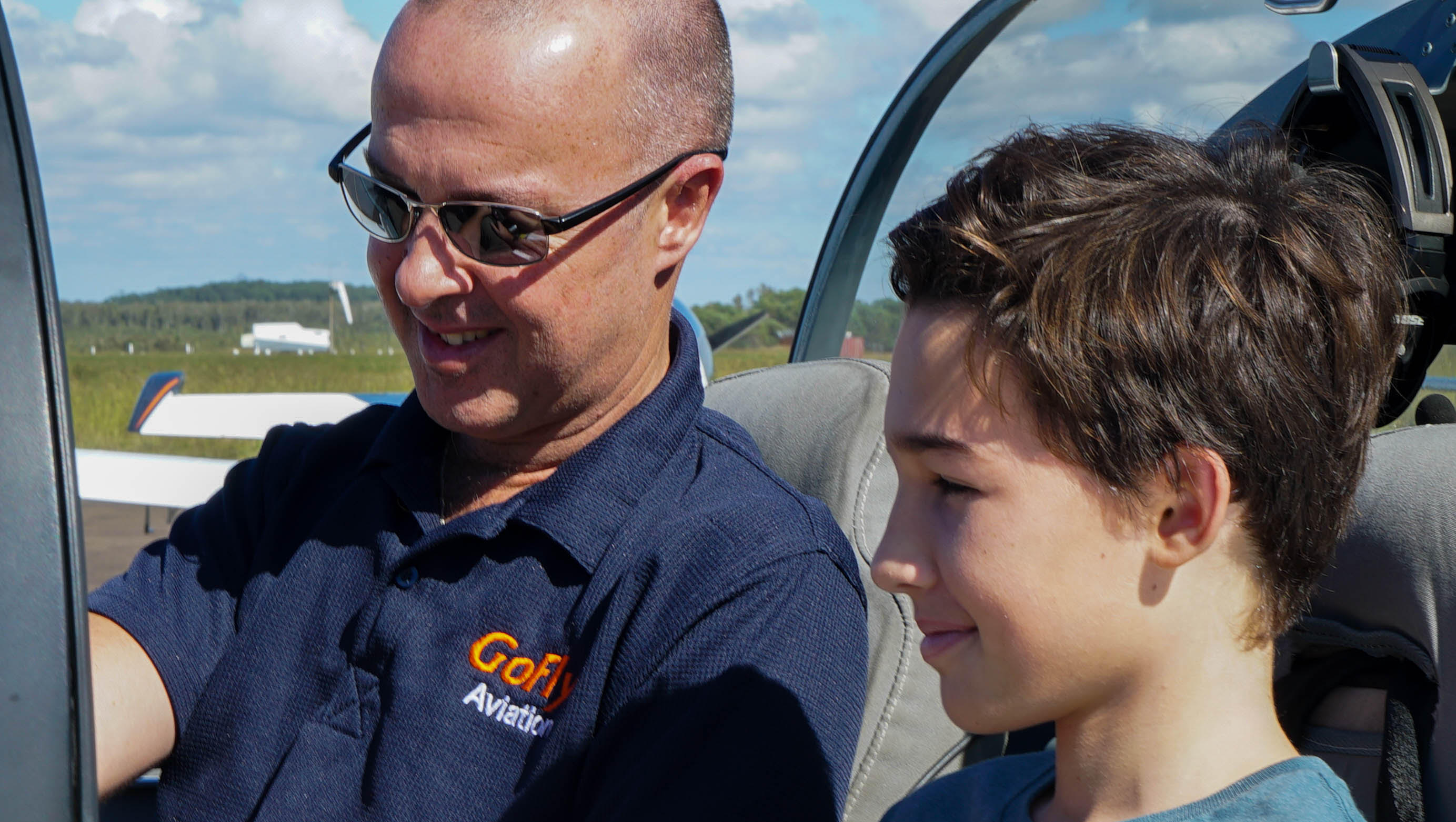 Let’s assume that you have decided that, as a loving parent, you want to support their dreams as best you can while also being a bit nervous that your child is going to be learning to fly. I get calls each week from parents who don’t know where to start when it comes to giving their child the best chance of obtaining employment as a pilot in the aviation industry.

To help those parents,  I have outlined in this blog seven critical points every parent should know, to help their child get started on their journey.

Does your child’s health meet the minimum required to be a commercial pilot?

There is no real point in getting a child’s hopes up for becoming an airline pilot if they do not meet the medical requirements for a class 01 commercial medical. If your child is healthy, not overweight and does not have any medical issues they would most likely pass a medical. Some of the health issues that may stop your child from becoming a commercial pilot, are: colour blindness, eyesight cannot be corrected properly with glasses, obesity and weight issues, diabetes, heart or respiratory issues. Also any history of mental illness or personality disorders may also preclude your child.

If you are still concerned, I would suggest booking an appointment with your local doctor to see if there is any health issue that may preclude them from being a pilot. If you’re really concerned you can also book an appointment with an approved a designated aviation medical examiner (also known as a DAME). You can go onto the CASA website  You don’t have to book in a full medical for your child but you can book an appointment to discuss your concerns with your DAME. If there are any issues they can even provide possible solutions to improve the health issue before the child starts their flight training.

Does your child have a realistic idea of what it is like to be a professional pilot?

There is a reason why schools run work experience programs: to give your child a good idea of what it would be like to work in a particular industry. Many younger children like the idea of flying but really have no idea if what is like to be a career pilot. A lot of young students have an unrealistic idea of that it is like to be a professional pilot.

In many instances they may have seen advertising showing how glamorous or adventurous it is being a professional pilot. While there is an element of truth to this, there is also a lot of other not so great things about being a pilot. For instance, becoming an airline pilot quite often involves a considerable amount of time away from home. This can be stressful, particularly if you have a partner or family. It is important that your child has a balanced view of their future career.  If they have a realistic idea of what is involved and still want to proceed with learning to fly, then you know that they really have a passion for flying and it’s not just a passing fad.

Our own GoFly Online website has interviews with Airline Pilots and you can also search YouTube for interviews with military pilots and airline pilots, to get a better understanding of what it is like working in this type of profession. I always tell my own children to choose work they enjoy and which is meaningful to them. I also tell them that no job or career will be perfect and there will be aspects of the work that you will not like, however if you love what you do the upside more than compensates for any downside.

The younger they start, the easier it will be to eventually secure a job

One of the key items a future employer is looking for in a pilot is how committed and passionate that individual is about flying. The best way to prove this to a future employer is by starting to fly at an early age. It shows that the individual is disciplined, committed and passionate about flying. The other advantage is that airlines and the Air Force are looking for a good return on their “pilot” investments. It costs a lot of money for an airline or the Air Force to train a commercial pilot on their own aircraft. They would prefer to spend the money on a young pilot and keep that employee for 30 years than employ an older pilot and only employ them for ten years. A younger pilot means less turnover and reduces the costs of training.

The other huge advantage to starting young is they are less likely to be in a steady relationship with kids and a mortgage. While you are  young and single, the cost of living is generally cheaper and you can focus all your time and energy on your career. You will also find it easy to relocate to get that first flying job if partners and kids are not involved. Generally the older you get, the more responsibilities and assets you have which make it harder to transition to a new career.

This one is a must. If your child shows a lot of interest in becoming a pilot then book them a trial flight with a reputable flight school near you. A trial flight is basically a casual introductory lesson that allows students to decide if they want to continue flight training. It’s also a wonderful opportunity to have a one-on one chat with a real flight instructor on the pros and cons of learning to fly and getting a job as a pilot. The instructor can also put a plan in place for the student getting their licence – whether that’s by full-time or part-time lessons.

Get them to do some flight lessons while at school

A lot of our flight school students start learning to fly with us around the age of 14. Many of them have achieved their Pilot Certificate at 15 or 16 before they can legally drive a car. The majority of these students are obsessed with flying and many of them actually pay for the flight training themselves by working part-time jobs.

A lot of parents have the fear that if their child focuses too much on learning to fly, their school grades may be affected,  however I have discovered the opposite is true: most of them work harder at school so they can have the best grades they can when applying for a future airline or the Air Force. When your child has a clear idea of their future career, they find it easier to justify the study involved to get there. The other benefit of flight training is it teaches your child to be disciplined and focused.

Paying for it: self-funded, VET fee, military training or cadetship?

This is always one of the first questions I get from parents whose child wants to learn to fly. May I suggest as well as this article you read my other blog called ‘How to become an employed airline pilot, while working and without having rich parents‘.

As previously stated, many of our younger flying students pay for their own training with part time jobs. If they can save $100 per week they can do a lesson every two to three weeks.  I would always recommend students paying for their own training if possible or at least some of their training, with their parents’ help. The other options are personal loans, VET fee or an Airline Cadetship. VET fee is a Government loan scheme that assists eligible students to pay their tuition fees for higher-level vocational education and training (VET) courses (at the diploma-level and above) undertaken at approved providers. The student will start paying off the loan once they start earning over a certain amount. The important thing to remember with VET fee is that it is still a debt and the average Commercial Pilot Licence (CPL) VET fee amount has another $20,000 administration fee  on top of the cost of the flight training.

It is not uncommon for the student to be left with a VET fee debt of around $100,000 when they finish flight training. I employ instructors who will be paying off student loans for the next 10-12 years. While I am not totally against VET fee, I still think the best option is to just take longer to get your licence and pay for the training yourself. While this may take an extra three years to complete your training, you will have no debt at the end of your training.

The major airlines do offer ‘Cadetships’ from time to time, however most of these Cadetship still use the VET fee program and students will incur debt. I personally think this type of VET fee is justifiable because at least you are offered a job with a major airline at the end of your training. The airlines offering cadetships prefer you to have some initial flight training experience before you apply, so this is another great reason why doing some flight lessons while still at school is a great idea.

If your child is too young to learn to fly or cannot afford to start flight training yet, there are still things you can do NOW to prepare them for flight trainig. I suggest they explore our new GoFly Online website were there are over 50 free videos about learning to fly and interviews about what is involved in becoming an airline pilot. These videos will greatly help your child decide if they want to become a commercial pilot and start learning to fly. There is also a Basic subscription option, which includes all the pre-flight briefings and in-flight lessons for the Recreational Pilot Certificate. These lessons will greatly assist with all the procedures that are required for a student to be a safe and competent pilot well before they begin their training. The videos will help them maintain their motivation. The earlier you start fueling their passion the easier it will be later for them to stay motivated through their flight training.

The future for air travel is very bright with new technology such as VTOL (vertical take off and landing) and new electric aircraft technology. This is a very exciting time to be learning how to fly, and as a former 15 year old boy who scraped together his own money for flying – and as a parent of four children – I know how important it is to encourage your child to follow their dreams from as young an age as possible.