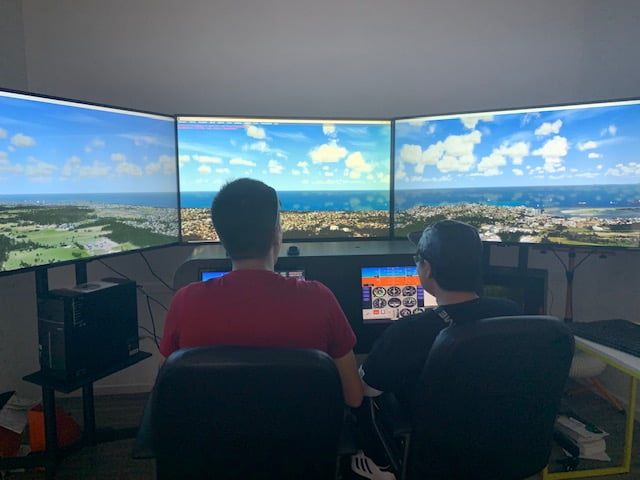 Why Virtual Reality flight simulation is going to be awesome... eventually! 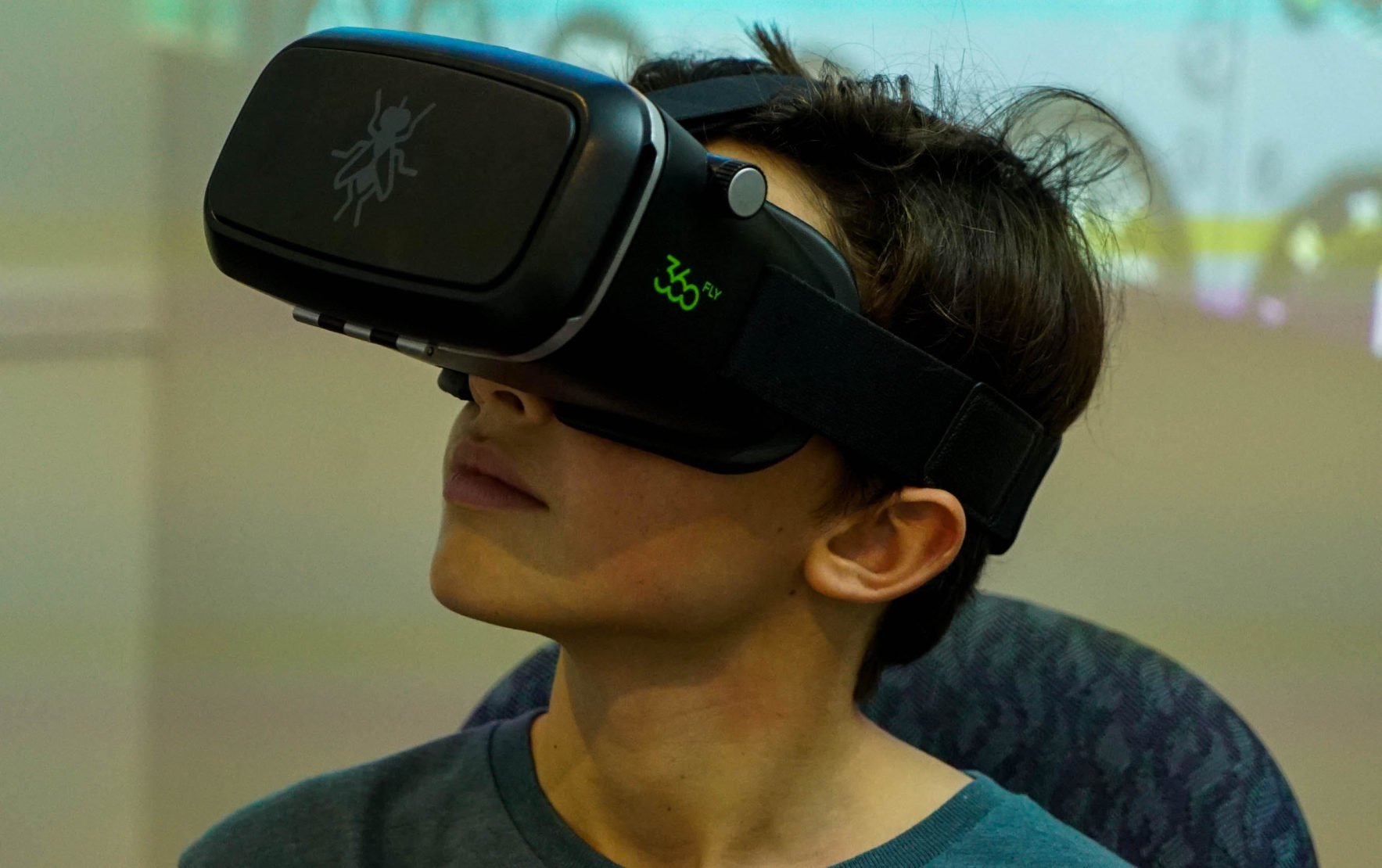 The team at GoFly Aviation are always looking for ways to improve the flight training experience for our student pilots. We’d already had reasonable results with virtual reality (VR) headsets and our 360-degree video lessons. In February, as a trial, we introduced the Oculus Rift headset with X Plane software as part of our research and development program, to see the potential for this technology to assist and enhance the flight training experience.

My good friend – and IT visionary – Jeremy, warned me that a VR flight simulator is still bleeding-edge technology and not quite leading-edge. In other words, the technology is not quite there yet and could be more trouble than it’s worth.

Being an eternal optimist, I did not heed his warning and decided to test the technology with some of our flight students. Several students took part in this research & development project, and I have outlined below the things we discovered over the course of a few months of using this technology – both the good and the bad.

Suspension of disbelief – most of the time!

The first time you enter the virtual work in Xplane is absolutely awesome! Sitting in the cockpit of a Cessna 172 on the apron, waiting to taxi to the runway you are automatically shocked at the incredible realism that surrounds you. You do feel as though you are really there. You can look behind you and see all the rear seats and the hangars located behind the aircraft. You really do feel like you are in a real aircraft about to go flying. There is no doubt the designers of both X plane and Oculus have done an incredible job.

After experiencing this for the first time you can imagine the incredible potential this technology promises, however……

While the graphics are very good, most of the current VR headsets including the Oculus, offer around 1080 by 1200 pixels per eye. This means that you can see slight pixelation when viewing the imagery. The resolution is not quite good enough to look at a number on an EFIS flight display without leaning forward to increase the image size. This can be distracting, particular if you trying to maintain a healthy airspeed on final approach!

If you were thinking about using VR for serious instrument flying forget it; at the moment it’s just too hard to read all the instruments accurately without being a distraction.

Currently most VR headsets allow you to see around 110-degree field of view or around 65% of what you can see in real life with your real eyes. The best way to describe how this affects your vision in the virtual world is to try and imagine learning to fly wearing a scuba mask. Obviously your ability to judge depth will be severely limited if you had to learn to fly with a scuba mask on.

The biggest issue is that when you are landing you have to move you head slightly to see the side of the runway to get a better idea of height off the runway.  It’s still light years ahead visually compared to using a single computer monitor, but it’s still not great.

Who took my hands?

The other issue with the VR is that if you have your simulator set up correctly with the VR headset you will have a throttle and control column and rudder pedals. While you can see these items in the VR world they may not match the real word. If you’re smart you can align them to match the real hardware in the real world but this is not easy to do. The other main issue is you cannot see you hands in the virtual world. This can be confusing and disorientating particularly if you want to set radio frequencies or select flaps. You have to use a mouse or oculus controllers to interact with anything in the cockpit. Add to this the fact that you have to lean forward to read small numbers, it becomes a little tedious.

A big issue with using VR for dual flight simulation training is that you cannot see your flight instructor sitting beside you in the plane and it is impossible to interact with the student visually while they have the VR headsets on. Yes you can talk to them but it’s not quite the same as being beside them and being able to communicate face to face. This might be a good thing if you are not an attractive flight instructor but I still believe most students want to be able to see their flight instructor.

Another big issue we discovered and I do mean BIG was VR sickness. Currently around 30 to 40 percent of VR users report getting motion sickness from using VR flight simulation. For actual real flight training it is around 5%. Perhaps users might get used to it the more they use it but it’s not a great marketing ploy to have to tell our customers ‘Don’t worry, you will only have to go through four sickbags before you start enjoying the experience.’

Who is sneaking up behind me

The other surprising feedback we encountered is that customers didn’t really like being stuck in a room and not knowing who might be sneaking up behind them. Once you are in the virtual world, you have no idea who is in the room with you. This can be unnerving for many students and offers the opportunity for some great practical jokes and Facebook posts.

It’s not all bad (if you like to fly alone)

Most of the issues we experienced were to do with using the simulation for dual training. The best use for the VR is personal use to practice on your own. If you’re willing to put in more than 10 hours of your time on how to use this technology (over a few days) to get over the potential sickness, then this is an awesome training tool to practice what you have already learnt during your real flight training.

You’re not going to win any awards with your better half or kids for being antisocial while using it (as it really blocks the entire world out) but it does feel very much like the real thing once you get used to its quirky issues.

Yes Jeremy you are always right…

I learnt that my friend Jeremy is normally right when it comes to predicting technology issues and trends. It was good to go through the process because it helped us design a new Flight Simulator that was easier to use and was designed for Dual Flight training. We have just finished building this new simulator that we have nicknamed the Sling Sim. It uses 3 large LCD screens side by side to give better peripheral depth perception while landing; has dual controls; and the student can now see a real instructor and not get motion sickness before they get in a real plane.

We will be using this virtual reality simulator to prepare our students for their ‘reality’. I am surprised more flight schools do not do this as simulators are a great tool for teaching the basics of flight training and enhancing the memory of procedures.

The Future of VR

My gut tells me that the future of VR flight simulation will be a mixture of solo use VR simulators with improved pixelation along with field of view headsets and the introduction of augmented-reality dual-training simulations that mix the best of both worlds.

Augmented-reality has the potential of being a game changer for simulation as it allows you to still see the physical controllers and flight instructors while simulating the visual scenery outside the cockpit. The potential applications for this technology are huge but I still believe this is probably 5 to 10 years away.

If you’re still not sure of whether you should buy a virtual reality headset for your flight simulator, I suggest you go flying while wearing a scuba mask to see if you can tolerate the limitations (only joking). It really is a personal decision. If I was learning to fly and had the funds, I would purchase a computer that could run both a standard flight sim like X plane on a large LCD screen and have an Oculus as well. I could practice circuits or basic maneouvres in the VR world (or fly an F18 for fun!) and later in my training I could practice instrument flying on the standard sim using the LCD monitor so that I can read all the instruments properly.

I really believe proper flight simulation is a fantastic tool to enhance all types of flight training if given the correct instruction and then used correctly.

Happy and safe flying, in the air and in your lounge room!