The twin issues of the pilot shortage 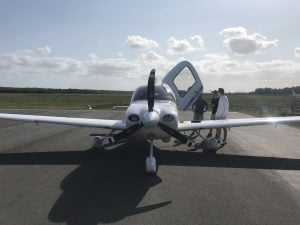 This article was originally written in February 2020 for the May edition of  ‘Australian Flying’ magazine – well before the outbreak of the Coronavirus pandemic, and its effects on the airline industry.

This article is for all Flight School operators, CASA and government policymakers, airline board members and anyone else who has an interest in innovation and the future of the aviation sector.

I’m going to suggest a change. The main problem with change is that most of us see change as a threat, plus there is a natural bias towards maintaining the status quo when something is already working. Changing is even harder when many individuals and businesses are still making a profit by doing things how they have always been done.

Presently Australia’s major airlines are experiencing a temporary lull in the hiring of pilots, but it is evident that there will soon be a serious global pilot shortage caused by the increase in low cost travel, the growth of the Asian middle-class and and the retirement of senior airline staff. Boeing for instance has projected that airlines and business aviation will require another 790,000 pilots worldwide by 2037. Added to this is the fact that not so many students are learning to fly as the cost of flight training has been steadily increasing. Also some segments of  the flight training industry have been declining for some time due to increased costs, regulation and, to put it politely, a lack of imagination and innovation.

When  business owners try to improve things for customers and staff, they try to reduce ‘friction points’ (or ‘pain points’). Flight training presently has many friction points, and I am going to focus on one of the main friction points which, I believe, if eliminated could create a positive trifecta for the airlines, General Aviation flight schools and student pilots.

Eliminate the need for a twin-engine instrument rating

The issue with this scenario is that twin-engine piston charter is in decline. The industry is replacing the ageing twins (such as Piper Chieftains and Barons) with single-engine turbine aircraft or twin-engine turbines and many of these charter routes are being replaced with small turbine RPT airlines. It is becoming harder and harder for self-funded future airline pilots to get a twin-engine charter job to build the twin command hours required for the airlines.

Most of the entry-level hour building jobs for the airlines are now coming from flight schools. Also airlines now prefer direct entry pilots to have an instructor rating as they can be utilised for check and training roles at a later stage.

BUILDING COMMAND TIME FOR THE AIRLINES AS A FLIGHT INSTRUCTOR

The major issue with building twin command time with a flight school is that twin-engine flying only accounts for about 15% (or less) of the overall flying conducted at a typical non-integrated CPL flight school.

This  means that for a typical flight school doing 100 hours of flying a week, it would take the average instructor three years to get to the point where they could conduct twin engine training and another three to four years to build up the required 500 hours of command that airlines want.

Contrary to popular belief, twin-engine piston aircraft are no safer than single-engine aircraft. In fact, your chance of a fatality is higher if you suffer an engine failure in a piston twin. Let’s not forget that on takeoff with a twin, you are twice as likely to suffer an engine failure, and in most light twins if you are at max take off weight on takeoff on a less than ideal day, then there is a very real chance you are not going to climb. This is just an additional training risk that flight schools have to carry for their business, instructors and students.

It doesn’t matter whether you are buying a second-hand twin or new aircraft, they are all expensive to purchase and maintain. A second-hand Baron can cost $150,000 to $500,000 while a new aircraft can cost upwards of a million dollars. The basic operating costs of a Baron (fuel, maintenance and engine replacement and insurance) is around $450 an hour. This is the minimum cost before the flight school can even think about making a profit. The current cost for a twin-engine endorsement and multi-engine instrument rating is between $20,000 to $30,000 for an Australian student pilot.

My suggestion is that the direct entry level requirement for airlines should be a CPL with a single-engine instrument rating and ATPL subjects passed. This would then allow schools to have only one or two aircraft types online for flight training. This would have the benefit of reducing costs for the flight school and the student and make available more potential pilots for the future airline pilot shortage.

If the airlines were not hiring at the time the student graduated, they could use the funds that would have been used for a twin-engine rating towards an Instructor rating to make them more employable.

You could hypothetically have a flight school doing ab initio training with a Cessna 172 which could also double as an IFR trainer and then the school only requires one Cessna 182 for CPL training and IFR training. (Personally I believe CPL training should be able to be conducted in a Cessna 172 providing it has a glass cockpit and autopilot. The Federal Aviation Administration in the US has now gone down this path.)

Alternatively, a flight school could potentially operate only a fleet of Cirrus SR 20s for use as both basic training and advanced IFR CPL training (one aircraft type; you don’t get much simpler than that). The benefit is that once you have obtained your single-engine rating, keeping it current would be a lot less expensive than keeping a multi-engine rating current. Currently the cost of a standard CPL with multi-engine instrument rating is around $85,000. With a single-engine IFR integrated into a CPL course, this could be reduced to around $60,000.

For those of you who worry about flying in heavy IMC in a single-engine aircraft, remember that IFR training can be conducted in VFR conditions with the student wearing a hood. You do not have to train in heavy IMC.

The flight school that I own operates a Cirrus SR20 for PPL and CPL training and the avionics are on par with any modern airliner. I believe that learning to conduct instrument training on this platform is going to be as good – or more beneficial – than in a 30 year old analogue piston twin for any future airline pilot. Also any Cessna 172 can be converted to have a modern Glass cockpit with autopilot for IFR training for a lot less cost than purchasing a new or secondhand twin-engine aircraft.

Operating a multi-engine piston aircraft is dramatically different from operating a multi-engine turbine or pure jet; performance and complexity being the big difference. The airline will type certify a newly employed pilot anyway on that particular aircraft. What airlines really want is a direct entry pilot who can fly an accurate instrument approach and who works well within a team and who is obsessed with flying. I would suggest that General Aviation twin piston charter companies follow the airline path and that CASA creates a type rating for every different type of twin-engine piston. So if you want a charter job flying Barons after your CPL, then you get a type rating on a Baron and this upgrades your single engine IFR to multi for that aircraft type.

The argument I hear from many airline and multi-engine pilots is that flying single pilot command twin engine IFR gives the pilot ‘real world’ experience before joining an airline. I don’t doubt that this does increase a pilot’s abilities however I would also suggest that flying single pilot IFR in a piston twin is a lot different than flying multi crew jets for an airline.  Also, a new First Officer in an airline will spend on average two to seven years as a First Officer before gaining a command position. Isn’t the First Officer learning real world experience during this time?

For those of you who don’t like change or think that what I am proposing is ridiculous, then I would point out that this idea is nothing new and is already working. The current MPL or Multi Crew Pilots Licence is used by many airlines in Europe and the Middle East and has been very successful since 2006.

The MPL course usually involves a student completing around 75 hours of basic and instrument training on a single-engine aircraft such as a Garmin Cessna 172. They complete their CPL and ATPL theory subjects and then progress directly to a type rating on a simulator for that particular jet.

No multi-engine time is required; just a focus on multi crew and advanced systems. If this licensing has been successful for many airlines then does it not stand to reason that the twin-engine rule is possibly redundant for direct entry airline pilots?

I find it slightly amusing that CASA is about to grant approval for electric VTOL passenger carrying aircraft in Melbourne for Uber Elevate and yet many students still have to learn in 30 year old gas-guzzling twin-engine aircraft before they can apply for an airline. There is a huge disconnect between new forms of transport and existing transport and training (having rules that were created around WWII). The reason for this is quite simple: a new industry such as electric on demand VTOL does not have entrenched rules and regulations and an existing bias towards maintaining the status quo.

Some flying schools who now operate twin trainers and who are making a profit may be angered by this article, however before they judge or make up their minds about whether my suggestions make sense, may I suggest they all ask themselves these important questions: